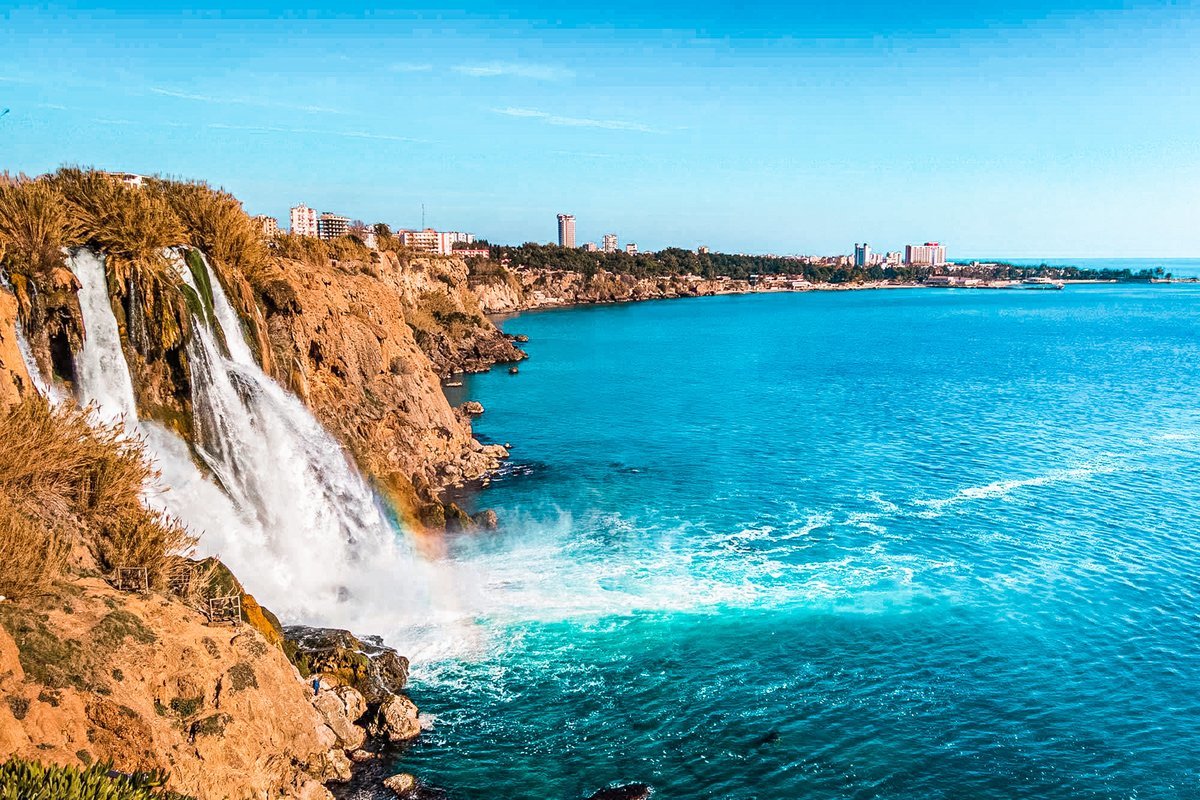 Showing 6 of 6 trips Sort by 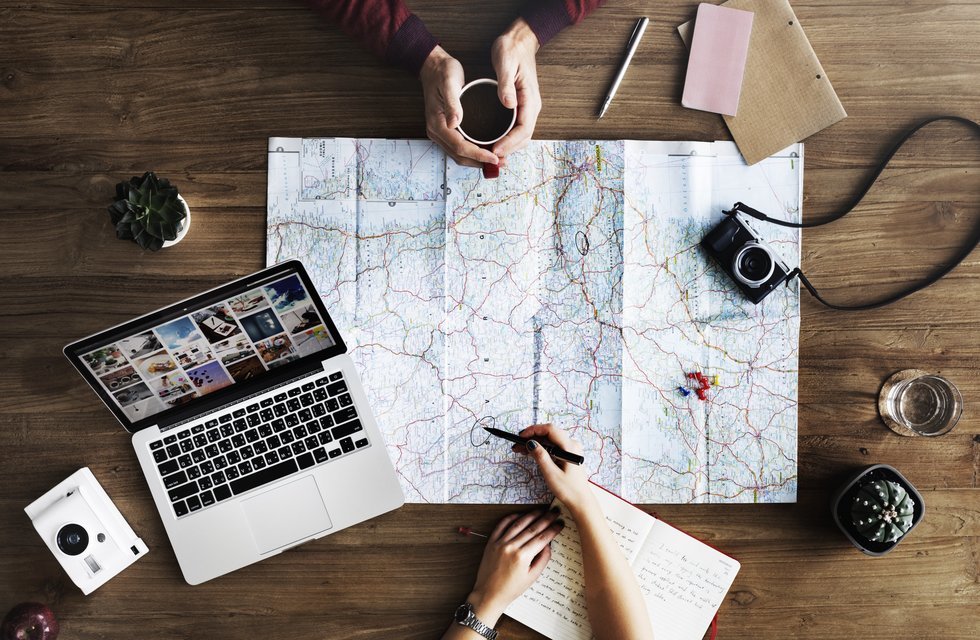 Contact us for help designing a custom trip and making the perfect decisions on locations, guides, transportation, and hotels. You can use the Ask a Question button here or on any tour page to contact us and request whatever you have in mind. We will send you an itinerary and price tailored to your request! 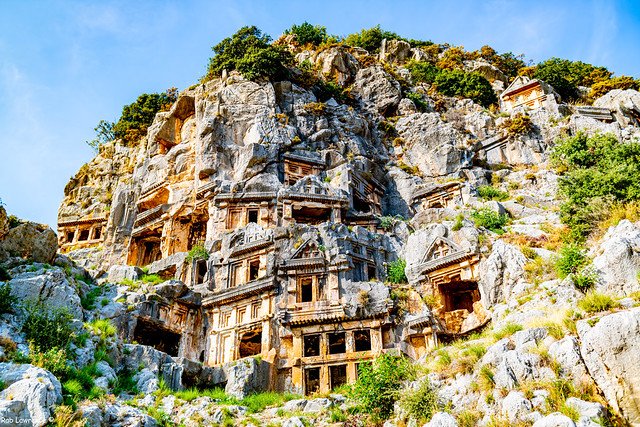 Antalya - Walk in the Lycian Footsteps

Walk in the Lycian Footsteps: Visit the Ancient Sites of the Lycian People It was a geopolitical region in Anatolia in what are now the provinces of Antalya and Muğla on the southern coast of Turkey, bordering the Mediterranean Sea and the sharp dramatic Toros Mountains. This area is a marvel of blue Mediterranean sea and green pine clad forest.    This unique tour is most often operated over 4 days starting in Antalya, and following the Mediterranean coastline westward where the Lycian people dwelled. You'll vary from seaside location to mountain tops and spend time in the glorious outdoors.    This tour can be designed per your desires and timing, just let us know. You may consider extending this trip by adding time in Istanbul or Ephesus using direct flights: See the tour extension details at: Istanbul Extension 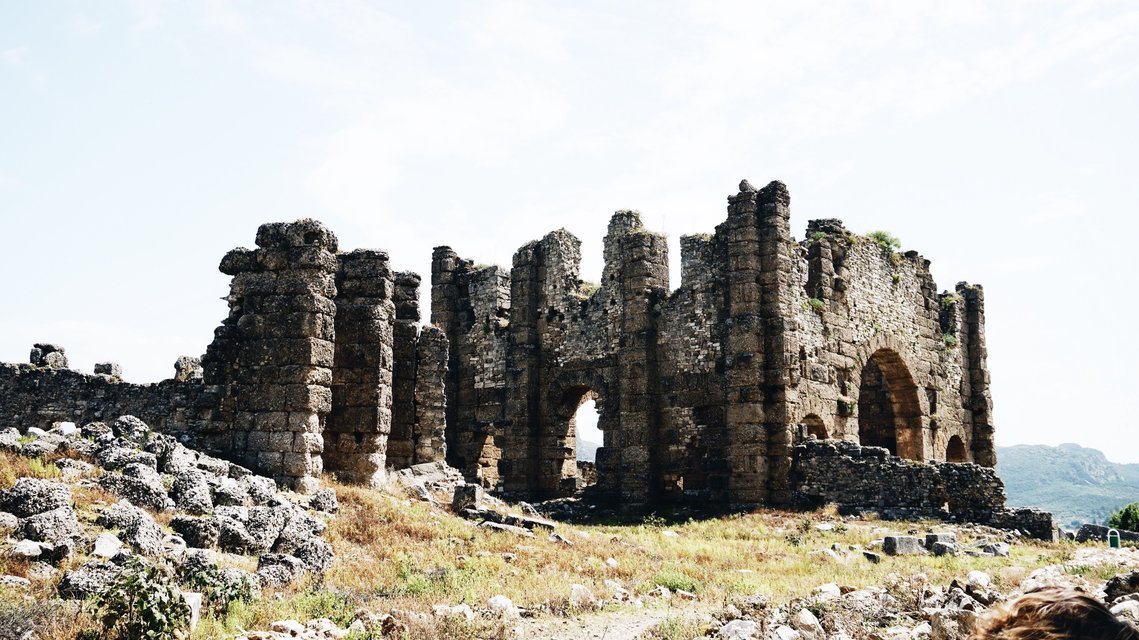 Pisidia is the ancient mountainous land that fully surrounds the plain of Pamphylia. From prehistoric to Roman times the people that occupied this region remained distinct from the Pamphylians (who were descendants the people of Troy who migrated to the region after losing in battle) even though they were likely distant relatives. Alexander the Great struggled with the Pisidians and was never fully able to defeat them. The Pamphylians, however, would never engage him. Later, when Persia battled Greece, the Pisidians supported the Persians. Then, even under the Roman rule, while Pamphylia obeyed Rome, the Pisidians continued to battle themselves, one another and the Romans. Their vigor and distinction is likely due to the extremely rugged mountainous terrain on which they lived. This made their lives hard and the lives of their enemies harder.  You'll experience the grandeur and rugged beauty of their mountaintop locations on this tour - visiting untouched sites close to Antalya.   From the mountaintop site of Termessos just 45 mins from Antalya, to the unbelievable restored grand fountains in Sagalassos to the forests surrounding Selge and Adada, these sites retain their rugged appearance and protected national forest distinction. To mix in variety for this tour, lunch each day will be at interesting stops – a country horse farm, a waterfall, or a lakeside. While there are a few hours of driving on day 2, 3 and 4, the sites are well worth seeing as they are unique and often free of other tourists. This tour is ideal if you like hiking, exploring off the beaten path and seeing what few others dare to see. 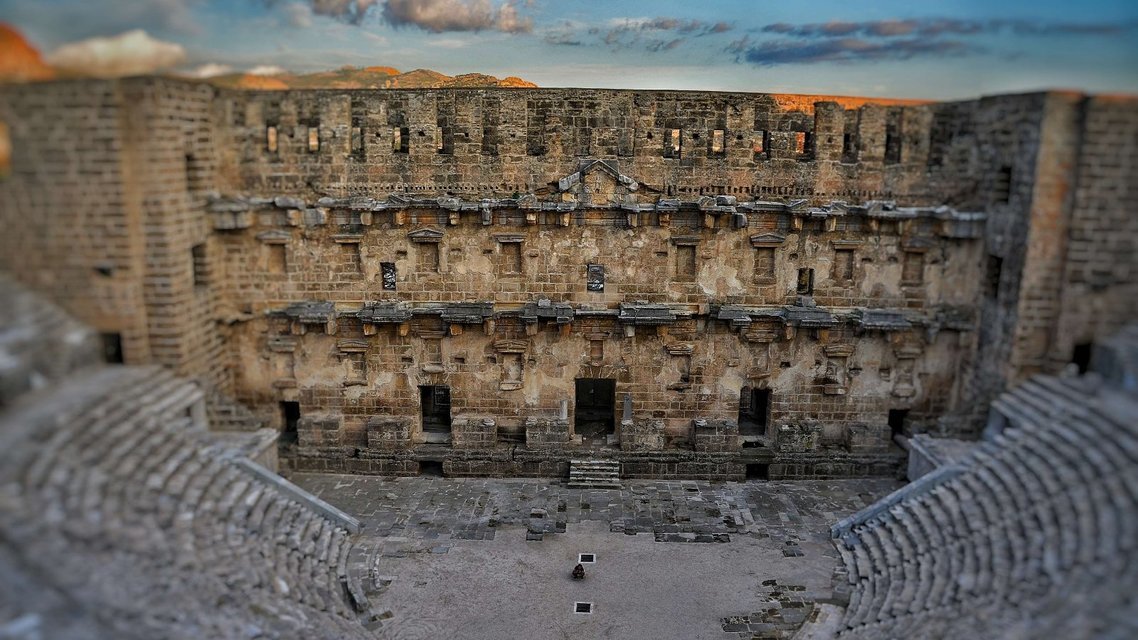 Antalya & the Plain of Pamphylia

Antalya resides on the western edge of the ancient plain of Pamphylia and is now the most visited city in Turkey and one of the top 10 tourist cities in the world. This tour of Mediterranean Turkey will focus on the beaches and ancient Greek/Romans sites on the flat Pamphylian plain. Your tour will start with a visit to the the Ancient city of Attallia – settled in 130 BC by King Attallos, the completely walled inner city or “Kale-ici” is now the heart of the thriving city of Antalya. The charming streets and restored homes make this a truly unique area to wander. Of course, all eyes are drawn to the beautiful harbor that is the foot of the old city. Your tour will also visit the award winning Antalya Museum – a spot not to be missed with one of the best collections and displays in Turkey. Here you will see the enormous Lycian tombs, a section on Saint Nicholas, a feature on the local nomadic people as well as the finest statuary from Perge. Over the next few days, you will see the 3 sister cities: Perge (of St. Paul’s fame), Side (an amazing site on the sea), and Aspendos (the finest Roman theater in Turkey). Each with their own unique character. You will also take an excursion on the last day to see some of the magnificent waterfalls in Antalya.  If you desire to enjoy the beautiful Mediterranean coast and seaside, your hotel has direct access to a unique seaside swimming venue or you may choose to stay at one of the excellent boutique hotels located in the old city of Kaleici. 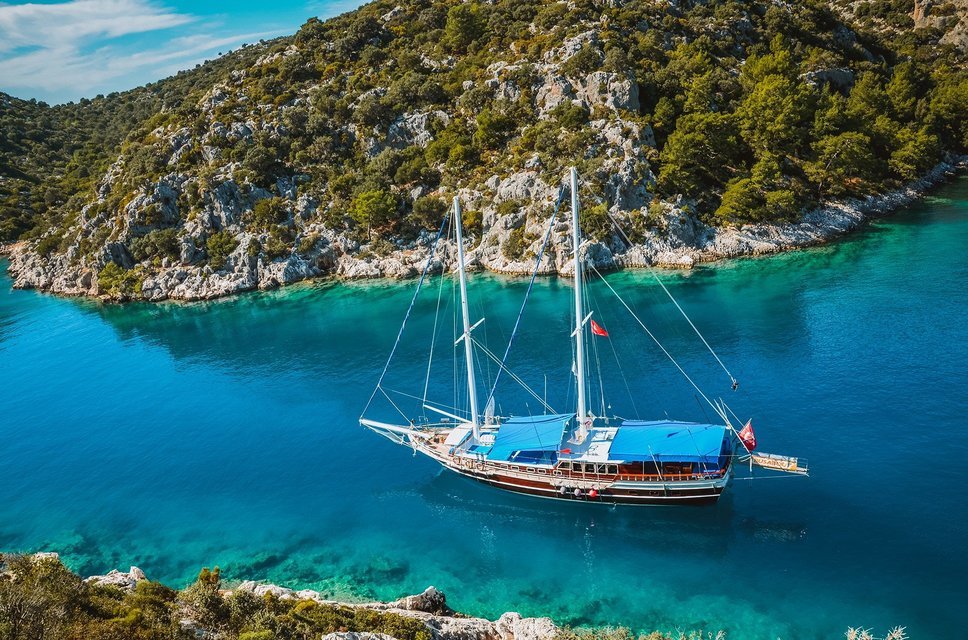 Set Sail on the Mediterranean Charter a private blue cruise boat based on your tour size! This tour is offered at a fixed price in April - June and Sep-Oct. Due very high demand contact us directly if you would like to travel in July or August. Just a few hour drive away from Antalya, Fethiye is waiting for you. Each day you will have your pick of activities from swimming, snorkeling, taking a nap, reading a book, or simply enjoying your surrounding and the being taken care of by the crew. No need to worry about cooking, cleaning, or anything but relaxing because the crew of this blue cruise is on it. Your boat will weigh anchor at a variety of quiet coves where you can explore and enjoy lunch. You'll also have the option to wonder the trails on the forested hill side that line the coast. Rehmi Bedri Cove is filled with a fresh water spring and bizarre rock paintings.  In the evening you'll get the chance to snorkel the sunken ruins of Cleopatra's baths or opt in for a 1 hour hike up and over the mountain that separates this much protected bay from the open Sea. Enjoy a full meal as the sun sets, and at night sleep under the starts soothed by the soft rocking of the boat as you drift around the Mediterranean and awaken to the stillness and quiet of the Sea. 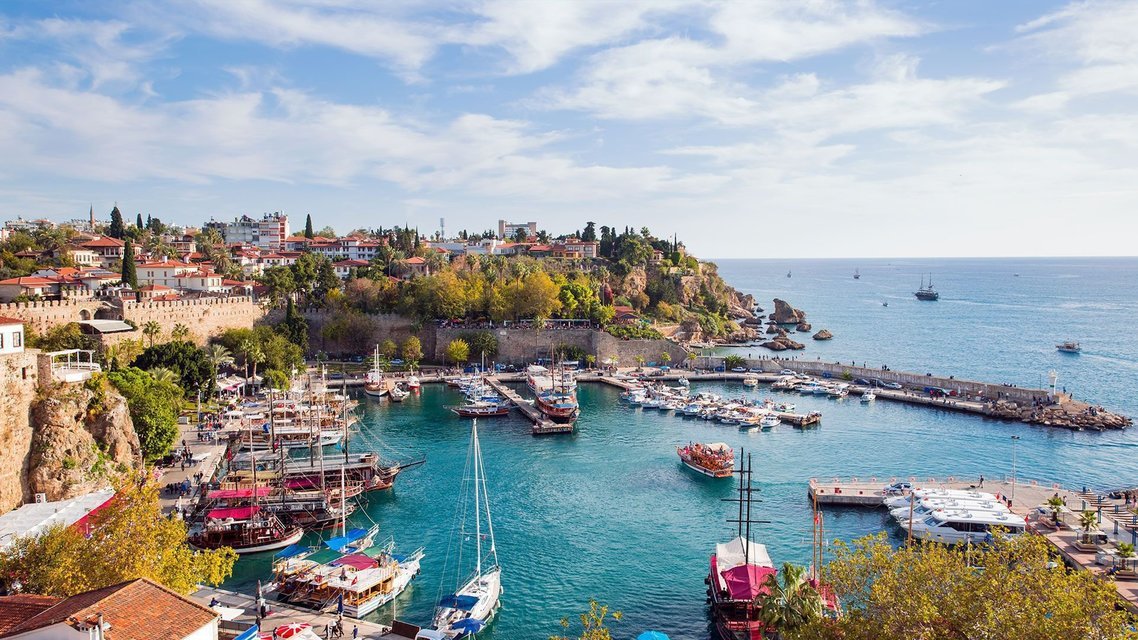 Antalya by Land and Sea

Discover Antalya, Turkey! A bustling city of entertainment, beaches, and Turkish culture, the city is a must visit location on your next trip to Turkey. Antalya is a unique blend of coastal cliffs, mountains, ancient streets and harbors, modern city life, and forests. Breathe in the sea air of the Mediterranean or take in the mountain views as you seamlessly move from the coast to a 2500m / 8000ft. mountain peak by way of cable car.    From customizing your arrival or departure day tour to taking a cruise on the coastline of the Mediterranean, relaxing with a cup of coffee or tea, or shopping for the perfect souvenir, our team is ready to build your ideal visit to Antalya. After your days of exploration head back to your hotel perfectly situated near the Old City of Kaleici where you will easily be able to enjoy the many delicious restaurants and night life of Antalya.